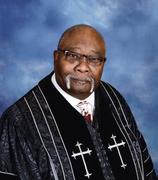 John L. Thatch is a native of Hertford, Perquimans County, North Carolina.  He attended the public schools of Perquimans County and graduated from Perquimans County Union School in Winfall, North Carolina. Upon graduation from high school, he attended Elizabeth City State University in Elizabeth City, North Carolina and graduated with a B. S. degree. He then matriculated at The Ohio State University and graduated with an M. A. degree and an Advanced Sixth Year Certificate. He holds the Degree of Associate of Religion from New Life Community School of Ministry and Bible Institute and has continued his education in preaching and teaching Christian disciplines at the Shaw University Divinity School in Raleigh, North Carolina. Currently, he holds the Associate of Religion from the New Life Community School of Ministry and Bible Institute in Raleigh, North Carolina and is still furthering his studies in religious education.
He has been and educator in several school system in North Carolina and in Columbus, Ohio. He retired as assistant principal at Northern Nash High School in the Nash-Rocky Mount Public School System. He has also worked in the various part-time positions on the collegiate level.
He joined the Saunders Grove Baptist Church in Hertford, North Carolina at a very early age and is presently a member of Pleasant Grove Baptist Church in Wendell, North Carolina. He is the current pastor at Good Hope Baptist Church in Knightdale, North Carolina. He served on the Executive Board of the Wake Missionary Baptist Association and, as at-large member, represented the Eastern District churches of the Association.
He was licensed in the gospel ministry on April 14, 1995 at First Baptist Church in High Point, North Carolina under the able leadership and guidance of the late Rev. Dr. F. L. Andrews, Pastor, and ordained on July 25, 1996 by the Ordination Council of the Rowan Baptist Association at Gethsemane Baptist Church in Salisbury, North Carolina. He has studied sacred theology and gospel preaching at Shaw Divinity School.
He is the son of the late Mr. Benjamin F. Thatch and Mrs. Otelia F. Thatch and is married to the former Miss Mary Alice Jervay. He is the father of three daughters, Robin, Shawn and Johanna and has eight grandchildren.
He is a gospel preacher who loves the Lord and loves his fellow man. He believes that we best serve God through service to our fellow man. He also is resolved that a minister’s message should be demonstrated through his day-to-day walk and feels that his personal testimony is best illustrated in these words: “If I can help somebody as I pass along, if I can cheer somebody with a word or song, if I can show somebody he’s traveling wrong, then my living shall not be in vain”

The third-generation editor and publisher of The Wilmington Journal, Thatch is committing to providing a voice for the area’s African American community. “The first African American paper in the country was Freedom’s Journal,” she says. “The first line read something like ‘we are here to plead our own cause.’ That will always be the mission of the black press: to fulfill the needs of the community we serve.” Thatch took the helm of the paper in 1996, following in the footsteps of her father, Thomas C. Jervay, Sr., and grandfather, R.S. Jervay, who founded the paper in 1927. A printer by trade, the elder Jervay moved to Wilmington from Columbus County in search of better educational opportunities for his family. The area had lacked an African American newspaper for 30 years, since the 1898 white-led race riot which killed at least two dozen African-Americans and overthrew the elected, bi-racial city council. Encouraged by his family, Jervay founded the Cape Fear Journal. In addition to Wilmington, it had offices in Fayetteville and Whiteville. “My father used to say he had printer’s ink in his nostrils because he grew up at the paper,” Thatch remembers. “He was the first carrier for the paper. He became editor after he graduated college.” As a child, Thatch and her family lived on the second floor of the building housing the now-renamed Wilmington Journal.  Everyone pitched in to help. “Growing up at the paper, it was a daily thing for the family,” she recalls. “We had family chores and Journal chores,” she recalls. During the civil rights movement of the 1960s and 70s, as Wilmington simmered in racial tension, Thatch saw first-hand the impact a committed journalist can have on a community. On Feb. 6, 1971, a white-owned grocery store was firebombed and emergency responders fired upon by snipers. In what became know as the Wilmington Ten case, ten community activists were convicted in 1972 of arson and other crimes. In the community unrest which followed, Jervay was outspoken in editorials and stories supporting the activists. In 1973, The Journal office was bombed but the paper never missed an edition. Planning a career in education, Thatch earned a Bachelor’s degree from Elizabeth City State, a Master’s from the University of North Carolina at Greensboro, and a vocational certificate from Ohio University. After teaching in Winston-Salem and Ohio, she returned to Wilmington to take up the reins at the paper. Over the past two decades, even as technology has changed the nature of the industry, Thatch has continued her forefathers’ tradition of community engagement. “We deliver news to the community and potential customers to our advertisers,” she says. “In the black press, something like 66 percent of our readers tell us we are their primary source for local news and events.” Under her editorship, the Journal sponsors events at the Upperman Cultural Center and is a strong supporter of the Southeastern North Carolina African-American Heritage Festival, which Thatch co-founded, and the annual MLK Celebration. Thatch gained national attention when, in 2011, she began organizing the Wilmington Ten Pardons of Innocence Project, following in her father’s footsteps. The activists’ sentences had been commuted by Gov. Jim Hunt in 1978 and the convictions overturned by a federal court in 1980. But the activists had not been found innocent. With the help of the NAACP, the National Newspaper Publishers Association (NNPA), Journal writer Cash Michaels and many others, the campaign uncovered key evidence from the original case and collected more than 150,000 signatures on petitions. On Dec. 31, 2012, Gov. Beverly Perdue issued pardons of innocence for each member of the Wilmington Ten. The NNPA honored Thatch with the Publisher of the Year award. “Being a part of the black press and knowing that there’s strength in the press, knowing that there’s strength in that pen, I was compelled to fight for justice,” she says.  Just as Thatch continued her father’s legacy, new generations are continuing to serve readers. Her daughters are current Journal staffers and her grandchildren have also played a part in producing the paper in recent years. “A family-owned newspaper is really part of the community,” Thatch says. “This is not just my paper; it is the community’s paper. The community is family.”  Biography written by Amanda K. Lee

From the NC Heritage Calendar: